Our Project Spotlights blog series focuses on many of the biggest and most unique projects we’ve completed at TCA Electric. Projects can be unique for many reasons, including specific needs and unique circumstances. Fortunately, our clients don’t often have fire damage restoration needs—but when they do, they know they can rely on our team here at TCA to get the job done!

For today’s Project Spotlight, we’re covering a fire damage restoration we completed at Gracie Barra gym right here in Vancouver. We had previously worked on another electrical project for the client, but their gym had been damaged by a fire in a neighboring building. They needed everything restored and up and running quickly so that the gym could reopen. Let’s take a look at how the TCA team helped with this fire damage restoration!

Gracie Barra is a martial arts gym located right here in Vancouver. Previously, they had called on TCA Electric to complete another project for them, and they were happy with our work. So, when their building was damaged by a fire, they knew just who to call to restore their electrical systems and get everything back up and running. This project also had us working once more with Factory Edge, a longtime collaborator of ours in general contracting.

While the fire that occurred was largely contained within a neighboring building, it still caused plenty of issues at Gracie Barra. The main issues were smoke and water damage throughout the gym, which left the studio unusable until everything could be restored.

In addition, TCA and the other contractors on the project were asked to help revamp and enhance the building, including through upgrades and reconfiguring the existing setup in the gym. With everything laid out for us, we pulled all the necessary permits and set to work.

The challenges: Water damage and a time crunch

Time was of the essence for this project. While we always aim to complete projects efficiently, for this project in particular the client needed the entire fire damage restoration to be completed as quickly as possible. This would minimize the time they needed to spend closed to the public.

In addition, dealing with smoke and (especially) water damage is always a particular challenge with electrical work. Safety is paramount whenever electricity and water are anywhere near each other, and it’s important to ensure that any damaged electrical implements are fully repaired or replaced.

The result: A revived and revamped space! 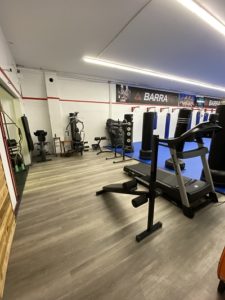 The entire team of contractors came through in fine style for this project, with a complete restoration of the gym that removed all traces of fire damage. For our part, the TCA team was able to reuse and repurpose most of the salvageable electrical fixtures. We also quickly repaired and troubleshooted circuits that had been damaged by the fire.

This was truly a team effort for TCA. With Warren Ferino as the project manager, everything ran smoothly. Lead electrician Matt Lambright was able to use his skills in commercial work to quickly and safely reestablish the space, and make sure it was up to seismic standards. Karen Jackson used her low voltage knowledge to restore their security system and networking needs, while apprentice Jake Ross supported our team throughout the project. TCA even helped consult with the client on reworking both the reception and merchandise counter to make it more efficient and welcoming to the customers.

Overall, this project was a major success, and the gym was completely restored!

TCA Electric: Here for Your Restoration Needs in Vancouver

If your home or business has been damaged by a fire, flood, or other unforeseen event, the licensed and qualified electricians here at TCA Electric have the experience and know-how to completely restore your electrical systems! We provide prompt, reliable electrical services to get everything up and running as quickly as possible. Get in touch with our team today!