In our Project Spotlights blog series, we like to share the most unique and exciting electrical projects we’ve done here at TCA Electric. Last time we covered our experiences wiring 43 float homes at Mosquito Creek Marina. Now, in part two of this four-part series, we’re talking about the float home dock wiring we did to keep the lights on in each of those homes! Wiring these docks was a unique challenge, but the TCA Electric team came through in the end.

TCA was brought in for a marina electrical project run jointly by Mosquito Creek Marina and Lynnwood Marina. Starting in 2010, this entire project lasted for 10 years and demanded all of our skills as expert marina electricians. In addition to wiring 43 float homes for all of the homeowners, we also needed to provide power for each of them. That meant our client for the float home dock wiring project was everyone at the Mosquito Creek Marina.

The project: A street on water

While the float homes were being wired, the power and other utilities for those homes would need to come from somewhere. For your usual land-based homes, utilities like electricity, water, gas, and sewage are typically run above, alongside, or below the street. For these float homes, though, the docks are like a street on water! The TCA Electric team would need to run wiring for the float homes along the docks of the marina, providing power for all the necessities of these homeowners. 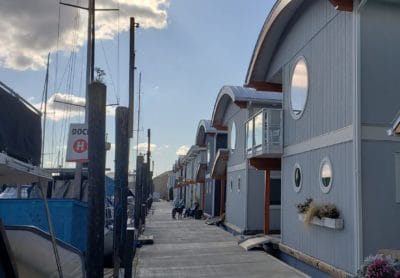 As with wiring the float homes, installing the float home dock wiring was a project that introduced many unique challenges. One major challenge we faced was a lack of access hatches at convenient locations. We’d need to find a way to overcome this limited access somehow in order to get our cables to where they needed to go.

The weather conditions created a challenge as well. While the marina docks function like a street, they’re also uniquely susceptible to freezing temperatures. In the winter months, it rains a lot in Vancouver, and concrete holds a lot of moisture. With the surface of the docks being made of concrete, the docks tend to freeze over, creating a hazardous icy surface to walk on. So in addition to our wiring for the float homes, TCA would need to solve this problem as well.

Going into this portion of the marina project, our team knew we would have to plan very carefully in order to succeed. We started by plotting out how to distribute all the power required for the float homes evenly throughout the docks. This included designing and installing electrical kiosks to distribute the power. By doing this, we minimized the weight of the electrical cables inside the docks, therefore minimizing the overall weight of the docks and reducing the amount of floats required under the docks.

For the access issues, we overcame this challenge by coring through the concrete docks and pulling our cables through, while navigating through the hidden wooden structure beneath the docks. Finally, to keep the docks from freezing over, we installed heating cables called Heat Trace inside of metal piping just below the surface of the docks. There were two strips placed  one foot apart from the centre, creating a safe two-foot walkway down the centre of the dock.

With all this done, we had a beautifully functioning dock that provided power for the float homes as well as a safe walkway for homeowners year-round. As TCA team member Brad put it, “The best part was the planning involved in designing the infrastructure, as well as removing the old wiring and providing a new and safer electrical system.” Putting together a careful plan of action and seeing it all come together was very rewarding!

Here at TCA Electric, our expertise as Vancouver marina electricians is second to none. Whether you need boat shed wiring and hookups or have something more major like the float home dock wiring we did for Mosquito Creek, the licensed and qualified professionals at TCA have you covered when it comes to marina electrical services. We hope you enjoyed this piece on the float home dock wiring for Mosquito Creek Marina! Be sure to stay tuned for the next part in this series, and catch up with us on Twitter, Instagram, and Facebook for more from your favourite Vancouver electricians.