Our Project Spotlights blog series is where we share our favourite electrical projects we’ve worked on here at TCA Electric. As such a major undertaking over the years, sharing our work at Mosquito Creek Marina was a no-brainer, as this project spanned 10 years and drew on all of our expertise as Vancouver marina electricians.

In part three of this four-part series, we’re taking a look at how the TCA team brought in additional power to the marina, to help support both the float homes and marina docks. This was a tricky balancing act, but the experts at TCA Electric rose to the challenge. And in case you missed them, be sure to check out our previous posts in this four-part series!

As with our work wiring the marina docks, bringing extra power to Mosquito Creek Marina was a project in and of itself. The folks at Mosquito Creek Marina first called on us in 2010, as we had already demonstrated our expertise as marina electricians through our maintenance work at Lynnwood Marina. They were very gracious clients, and we were eager to tackle this multiphase project!

The project: Providing power for the new float homes and marina docks 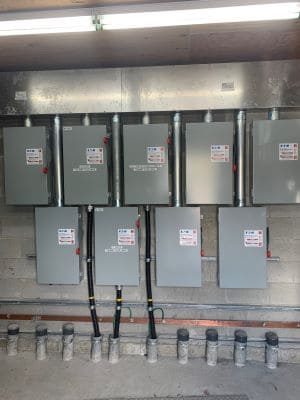 In parts one and two of this series, we discussed how we wired 43 float homes as well as the marina docks to support the residents living in these homes. All these new homes would increase the electrical demand at Mosquito Creek Marina well beyond the norm. This meant we would need to supply additional power to the marina in order to avoid overloading the two existing electrical rooms. After working closely with BC Hydro engineers and designers, we determined that adding a third electrical room would be the best course of action. So, that’s what the TCA Electric team set out to do!

The challenges: A careful balancing act

Since each portion of this massive marina electrical project was happening at the same time, the new float homes that trickled in would need to draw power from somewhere while the third electrical room was still being constructed. This meant that we needed to balance the power in the two existing electrical rooms to ensure that neither would be overloaded in the meantime.

To maintain the balance, we continuously routed and rerouted power between these two electrical rooms—a tricky proposition, as we had to consider the fluctuating demands of boats, boat sheds, and even offices throughout the marina. With the arrival of winter, demands shifted, as things like heaters and snow melt drew on additional power. Further, the float homes drew on 100 amps each, so the new arrival of each float home greatly affected that delicate balance of electricity.

Don’t forget to leave the lights on! 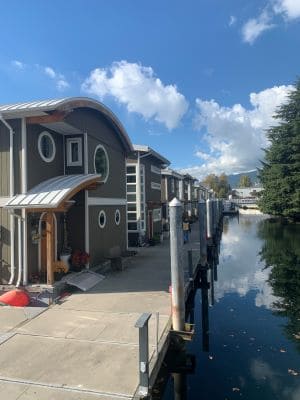 As a further challenge, our Vancouver marina electricians had to make sure everyone had their power restored before we left at the end of the day. With each new float home, we had to disconnect power from a given dock as the home was towed into place. Depending on the tides, weather, and other factors, this could happen at just about any time of day—and we had to make sure not to leave anyone in the dark once we left for the day!

The result: The TCA team keeps our footing

Many unpredictable factors threatened to disrupt our careful balancing act between electrical rooms. But our professional electricians shined through! Thanks to careful calculations and planning, we kept the power balanced between Mosquito Creek Marina’s original electrical rooms until the third could be brought online. Once online, all 43 float homes and the docks connecting them were able to safely receive power, with plenty to spare throughout the marina.