We love to showcase the work we do for our wonderful clients here at TCA Electric. That’s why we began our Project Spotlights blog series—to share some of our favourite projects over the years. In this special, four-part edition of our Project Spotlights series, we’re going to share the specifics of a huge marina electrical project 10 years in the making! As leading Vancouver marina electricians, we were called in for a major project at Mosquito Creek Marina. Let’s dive right into the first part of this special edition, starting with the float homes at Mosquito Creek.

Back in 2010, TCA was brought in for a joint project between Mosquito Creek Marina and Lynnwood Marina. We were already the maintenance electrical contractor at Lynnwood Marina, and we had shown our expertise as Vancouver marina electricians. When Mosquito Creek Marina had several electrical projects they needed taken care of, they knew just who to call.

While this marina project as a whole was brought to us by the folks at Mosquito Creek and Lynnwood Marinas, our clients for these float homes were actually the owners themselves. That meant we’d be working with more than 40 homeowners to meet their exact needs.

In the first part of our marina project, we were to do the wiring on the float homes at Mosquito Creek. Float homes are homes that, well, float! Rather than being built on solid land, they’re constructed on floats that allow the homes to rise and fall with the tides. Aside from the fact that they sit in the water, these homes have pretty much everything else you’d expect in an ordinary house, from kitchens to washrooms, and they even had multiple floors. There were 43 homes to wire in total, and we were the only electricians working on this major Vancouver marina project. We weren’t completely alone, though, and we were glad to have the company of Curtis Heating and Air Ltd working alongside us. 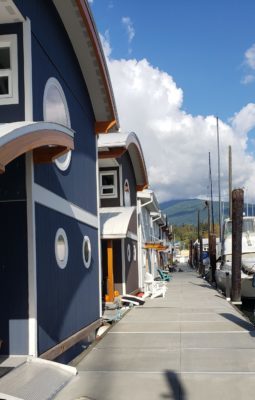 The challenges: Getting our sea legs

There were several unexpected and unique challenges that made this project interesting. To begin with, the homes were originally going to be identical, making it much more straightforward to wire all 43 homes. In the end, though, each home wound up having a different design based on the owners’ needs, so we had to carefully plan around these differences.

Besides this, there were many unique challenges of working on float homes that we didn’t realize until the project began. A quick example? Levels don’t work when you’re on the water! Because of differences in weight and buoyancy, the homes simply weren’t level, so we had to get creative. In addition to that, none of our team members had ever actually lived in a float home. The homes would shift around ever so slightly, and we felt the movement much more when we stood on ladders. That was definitely tricky to get used to!

The results: A new floating neighbourhood

In the end, the project was a success, and we finished wiring the last of the new float homes in 2020! For each home, we took into consideration what the individual homeowner wanted. We provided suggestions and options for different lighting designs, electrical systems, and technologies that were available. While certainly a challenge, this was a very rewarding project for TCA’s Vancouver marina electricians. “The project in itself was very unique given that we were helping to build homes that float on water. Whenever I tell people we helped wire floating homes they are always in disbelief!” Said TCA team member Warren Ferino.

When it comes to marina electrical work in Vancouver, the expert marina electricians at TCA Electric can handle any project. From wiring float homes to repairs and upgrades for your marina devices, we have the qualifications and expertise to meet your needs with a complete selection of marina electrical services. We hope you enjoyed learning about our work on Mosquito Creek Marina’s gorgeous float homes! Stay tuned for part two of this ongoing series, and follow us on Twitter, Instagram, and Facebook for more from your favourite Vancouver marina electricians.